Network sets up a working group

Network sets up a working group on medium-term budgetary frameworks 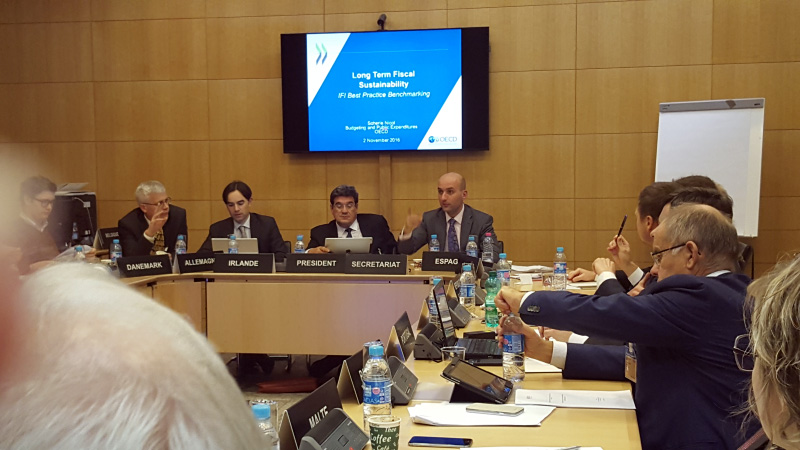 The meeting, second for the Network this year, was hosted by the Organization for Economic Cooperation and Development (OECD) and chaired by José Luis Escrivá. It was attended by representatives from 22 IFIs of the EU plus the Serbian Fiscal Council as observer.

The first working session followed up on the state of affairs in the main initiatives of the Network, and discussed current issues of special relevance. In particular, there was an exchange of views on the establishment of the new European Fiscal Board (EFB) whose members have been appointed recently and which could become operational soon. The Network’s members supported a meeting between their President and the EFB before the end of 2016 with the aim to establish a first contact and exchange opinions on the relations between this new institution and the national IFIs. Also, the Network was reminded of the possibility for this year’s recommendation from the EU Council to the euro area to refer to the importance of national fiscal frameworks (NFF) with a special focus on the IFIs. During this first session, the Network also discussed questions surrounding the external evaluation of IFIs and the results from a recent survey among IFIs on the practical implementation of the Comply or Explain principle.

In a new initiative of the Network, Chiara Goretti (member of the Council of the Italian Parliamentary Budget Office (Ufficio Parlamentare di Bilancio) has been appointed to chair a working group on medium-term budgetary frameworks. Since its creation, the Network has highlighted the positive contribution that medium-term budgetary frameworks at the national level could make, in order to promote transparency, efficiency and to enhance the predictability of fiscal policy.

The second session, attended by expert economists from the OECD as well as by an advisor to the Dutch Minister of Finance, covered in more depth topics related to the sustainability and quality of public finances. Scherie Nicol, from the OECD’s Public Governance Department, presented the conclusions from the project that generates useful benchmarks for the IFIs concerning reports on the long-term sustainability of public finances. Álvaro Pina, Senior Economist from the OECD, presented a recent working paper on the quality of public finances. Pina argued for a fiscal policy stance more conducive to growth, the strengthening of national fiscal framework (NFFs), in particular of the IFIs, as well as a reform of the fiscal governance in the European Economic and Monetary Union. He also proposed a set of recommendations to make public investment more effective.

Finally, Tjeerd Tim, advisor to the Dutch Minister of Finance, shared insights on the progress and the improvements made by the Dutch Government since the creation of the Commission of Risks in 2013, which is meant to identify contingent liabilities, in particular, public guarantees, and make recommendations for better management of risk within the budgeting process.